The History Behind Lions International

Melvin Jones was born on January 13, 1879 in Fort Thomas, Arizona. He was the son of a United States Army Captain who commanded a troop of scouts. His father was later transferred and the family moved east. As a young man, Melvin Jones made his home in Chicago, Illinois. He became associated with an insurance firm, and in 1913, he formed his own agency.

He soon joined The Business Circle, a businessmen's luncheon group, and was elected Secretary shortly after. This group was one of many at that time, that was devoted solely to promoting the financial interests of their members. Because of their limited appeal, they were destined to disappear.

Melvin Jones, then a 38-year-old Chicago business leader, had other plans. "What if these men," Melvin Jones asked, "who are successful because of their drive, intelligence and ambition, were to put their talents to work improving their communities?" Thus, at his invitation, delegates from other men's clubs met in Chicago to lay the groundwork for such an organization. On June 7, 1917, Lions International was born.

It was thanks to the support of Canadian Lions – and the intervention of Her Late Majesty Queen Elizabeth, the Queen Mother, that the first Lions club in London was founded in 1950.

Canadian Lions had provided invaluable support for children orphaned in the Second World War. To thank them, the then Queen sent her equerry Colonel Edward Wyndham (later Lord Leconfield) to Canada. He was so impressed that Windsor (Ontario) Lions Club agreed to sponsor the first London club, with Lord Leconfield as its founding Charter President. 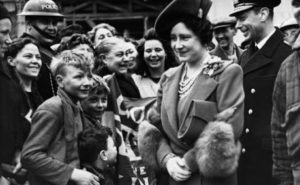